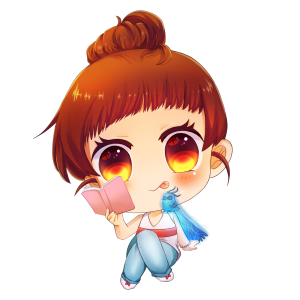 “Are you going to work together with Ling Mo?” the man asked as he accepted the gold. Jiang Yao frowned for a bit before he glanced at Luo Xiao and then nodded his head.

Seeing the glance he sent Luo Xiao, the man raised an eyebrow. Finally, his curiosity got the better of him, and he couldn’t help but ask, “Who is this handsome young man?”

Jiang Yao narrowed his eyes when he heard the question, but he didn’t get mad; Instead, he observed the man before sighing deeply. “Don’t worry about him,” he said after some hesitation.

The man was surprised by this answer, but he understood that Jiang Yao was unwilling to talk about him, and thus, he didn’t ask any more questions.

“Ling Mo has already arrived in Xiyang City,” the man said, “he came a week ago. He’s waiting at Sunset Tower in the middle of the city. You might as well meet up with him ahead of time and head off to find the Moon Anise as soon as possible.”

Nodding, Jiang Yao rose to his feet and gestured for Luo Xiao to follow. The young boy instantly nodded his head and rushed after him. Before he left the room, he turned around and bowed to the man. His dad always taught him to be polite, and although he had not been spoken to, he had still been inside his home.

Seeing the gesture, the man’s lips turned upwards into a smile, and he couldn’t help but laugh.

Jiang Yao, on the other hand, became rather annoyed. This youngster should not be so friendly towards people he didn’t know. He would be easily tricked in the future if he did not change his personality.

“Come on!” he urged, and Luo Xiao quickly followed behind him. “Walk by my side,” Jiang Yao ordered, and after some hesitation, Luo Xiao sped up arriving next to him.

He was incredibly conscious of himself while walking next to Jiang Yao, so he looked down at the ground, not daring to speak at all. So far he was still terrified by this person by his side.

They didn’t return the way they had come but walked straight to the middle of the city. At the city’s center, there was a massive hotel. Hotels were different from inns, much more luxurious, and this hotel seemed almost as magnificent as the inn they had stayed at so far.

Without waiting, Jiang Yao entered and went straight to the counter, and after being stunned, Luo Xiao followed behind him.

“We are looking for Ling Mo, I imagine he is waiting for me,” Jiang Yao said in a voice that left no room for disagreement. The servant behind the counter was stumped by his handsome appearance and his majestic voice, so he stumbled for quite some time before he managed to find the room belonging to Ling Mo.

“He is on the third floor, room seven,” he said with a shaking voice. Jiang Yao nodded and threw a gold coin at the server then headed up the stairs.

Luo Xiao hesitated. “Should I follow?” he asked whilst slowing down. Maybe Jiang Yao wanted to talk with this Ling Mo person alone; he did not know.

But moments after he stopped walking, Jiang Yao also came to a stop and turned to look at him with annoyance in his eyes, “Everywhere I go, you will follow!” he ordered, and Luo Xiao nodded in fear.

When thinking about it, he realized that it was, in fact, not too big a deal to go with him. He already had a soul seal branded into his soul; therefore, it was impossible for him to betray this immortal, so being with him was only natural.

They reached the room, Jiang Yao knocked a few times before opening the door. “Ling Mo, you in?” he asked as he went into the room, not waiting for someone to answer.

“Your hi…”, this man was also silenced with a single glare, and he frowned looking at the young man at Jiang Yao’s side.

“He is?” he asked with disdain in his eyes and arrogance in his voice.

“He’s with me,” Jiang Yao said, not going into details; not even mentioning his name.

“Is he coming with us?” Ling Mo asked again, clearly displeased but Jiang Yao completely ignored the obvious displeasure and just nodded. “He will follow me wherever I go,” he said casually.

Luo Xiao was puzzled. He felt a sense of crisis when he looked at this Ling Mo, and he couldn’t help but hide behind Jiang Yao. Although Jiang Yao was also rather scary, he had after all displayed an interest in him. Jiang Yao treated him fairly well, although he also treated him like something he owned.

Seeing his reaction Jiang Yao could not help but chuckle, but he didn’t push him away, instead, he stayed protectively in front of him.

“What should I call you?” Ling Mo asked with a sigh. Jiang Yao thought for a moment before answering, “Sir Jiang works,” he said casually as if he were doing him a great favor.

“Sir Jiang, you want to find the item soon, so I suggest that you do not bring useless garbage along. It will just slow us down.” Ling Mo clearly didn’t care that Luo Xiao heard what he thought of him, he was straightforward and harsh.

“Why does it matter to you?” Jiang Yao asked with amusement in his voice, “I will be the one carrying him, so it won’t cause us to lose time.”

“It’s below your status to carry anyone much less a commoner!” the man exclaimed, shocked and filled with disbelief, but Jiang Yao just shrugged his shoulders. It was indeed true that he would never carry other experts or commoners, he wouldn’t even carry his brothers or sisters, but there was something about this young child that made him not mind his actions.

“It’s preposterous!” Ling Mo fumed with anger. His eyes seemed as if they would eat Luo Xiao alive, chew on him, and then spit him out for the beasts to eat.

Looking at Luo Xiao, he couldn’t see any of his positive points, other than his appearance, resulting in him thinking that he had seduced Jiang Yao. Luo Xiao was, after all, more delicate than even most women, and his appearance was as beautiful as a fairy.

Luo Xiao was naive and very innocent. He had no way of understanding Ling Mo’s thoughts, but Jiang Yao understood perfectly well from the words spoken, but he didn’t care. His face didn’t even twitch, he just completely ignored Ling Mo.

“We are leaving tomorrow at dawn,” Jiang Yao finally said after sighing. “You’re welcome to come with us if you want. We’re at the Seven Star Inn, and you can find us in the room on the top floor.”

“Are you sharing a room?” Ling Mo asked while gnashing his teeth, but Jiang Yao just smiled and reached behind him after which he locked his hands with Luo Xiao’s.

Luo Xiao was stunned by this gesture and didn’t understand it. He had not held hands with anyone since he was a small child and held his father’s hand. He tried to withdraw his hand, only to find that Jiang Yao had a grip of iron and wasn’t willing to let go.

“Let’s go Xiaoxiao,” he said with a smile on his face as he dragged the stunned Luo Xiao from the room.

When they left, a loud crash was heard from within, and although Luo Xiao craned his neck and looked behind him, he didn’t see anything as the door was closed.

“Uh, Sir Jiang, shouldn’t we see if he is okay?” Luo Xiao asked nervously, “That was quite a loud crash; I fear he might have injured himself and then he would be unable to join us tomorrow!”

Jiang Yao looked at Luo Xiao, “Why are you calling me Sir Jiang?”

“You told that Sir Ling to call you Sir Jiang. He seemed to be someone of status, so how can I not do the same?” He asked puzzled, but Jiang Yao was clearly displeased again.

“I told you to call me Jiang Yao,” he said, completely ignoring the loud crash they heard from within the room they just left.

Luo Xiao sensed that if he didn’t agree, then he would be in for a world of pain, so he quickly nodded his head.

Back in the room, Ling Mo had destroyed all the furniture in the room. Now, only fragments remained, lying in heaps on the ground.

His eyes had turned blood-red. He gnashed his teeth and clenched his fists so hard that the nails dug into his palms.

“His Highness has never taken an interest in someone before! Why has he suddenly taken an interest in such a weak, pathetic soul cultivator with no merits apart from his appearance? If he were stronger, then I would have been sure that he was a fox spirit or succubus, but he isn’t! His strength is not enough to have any effect on his Highness.”

“Could it be that his appearance has bewitched his Highness? He is used to seeing the most handsome men and most beautiful women in the world all fawning over him, so it’s strange to expect one person’s appearance could make such a difference in his behavior. Could it be he has some sort of treasure that his Highness wants?”

Ling Mo spent the rest of the day contemplating this matter, but the more he thought about it, the more annoyed and angry he became.

“Let’s see if he can survive this trip!” Ling Mo finally said with gritted teeth and a gleam of madness in his eyes.

“When he is dead, I am sure that his Highness will spend the rest of his time together with me, and then we can finally become closer. Of course, he must never know that I am the cause of that little toy’s death.”

While Ling Mo was busy planning such things, Jiang Yao brought Luo Xiao back to their room at the Seven Star Inn. Here, he ordered some food and for once shared a meal together with Luo Xiao. Although he didn’t need to eat, he felt that it could be enjoyable to eat along with this young boy.

After they finished their meal, Luo Xiao started to once again cultivate his spiritual energy. He understood that if this Fourth Brother of Jiang Yao was the creator of the corpse puppet, then he had to be frighteningly strong.

He, who had just started cultivating, knew that he had a long road in front of him, but he didn’t give up because of this; instead, he was eager to improve.

Jiang Yao saw how diligently Luo Xiao cultivated, and he nodded his head in approval. Without waking him, he ordered some maids and servers to clear the table of food, and once more sat down to observe Luo Xiao cultivate. His Astral Soul could be consider the peak amongst all Astral Souls, of this Jiang Yao had no doubt.