Chapter One Hundred and Ten: Omen

This time, Xiao Yu’s birthday happened to be around the Lunar New Year. Yan Jin decided to postpone it a day later and celebrate it on the sixteenth night along with Lunar New Year’s Eve.

After they had cut the cake and given the sculpture gifts, the group happily gathered for a meal of hot pot.

The location was Yan Jin’s house. The participant count was 2+0.5.

“Squeak.” Xiao Yu let out a displeased squeak as he looked at the table filled with ingredients that were yet to be cooked.

Chu Ge, who was eating blissfully, turned around as well.

“It is?” Yan Jin seemed to give it a hard thought before he replied: “I think it’s quite lively. We even have background music.”

It was true that there was background music – It came from that giant musical theme park in the miniature artifact that was received in February.

The details of the miniature artifact were extremely complicated. The original completion was due in March. Yan Jin had misused his identity to make threats and promises to ensure that it was completed half a month earlier. With great difficulty, he managed to receive it in the evening on the fifteenth, as the parcel arrived in the mail earlier that morning. Chu Ge helped set up the artifact, but he had not brought it to the second level, which was why piano melody could be heard in the background.

The miniature theme park was almost the same as a real-life theme park. All of the entertainment facilities could be operated. Xiao Yu had sat for at least three to four rounds on the merry-go-round before dinner was served. He also refused to leave the Ferris wheel and ended up being forcefully removed by Yan Jin.

The entire theme park was like a musical box. When you opened the box, the theme park would start to operate normally as beautiful music started to play.

Xiao Yu could not accept Yan Jin’s specious arguments at all. The hamster was trying to comment on the fact that only the three of them were gathered together in loneliness, and it did not feel like there was a new year’s atmosphere.

“Squeakkk.” Don’t you two need to spend time with your families?

Yan Jin looked Xiao Yu in eyes and answered earnestly: “You are my family.”

Xiao Yu, who was caught off guard by the sudden teasing, changed his target to Chu Ge: “Squeak?” How about him?

“Dafug, what are you looking at? You two are too much.”

Chu Ge could not help but ridicule them.

He perceived the human and hamster conversation as a person speaking and a hamster squeaking in response. Such a communication method was simply too unbearable for the doctor. It was like watching a person equipped with level ten animal communication superpowers. It was a miracle that he had tolerated them so far, yet they both suddenly turned to look at him after some unknown conversation between themselves.

To sum it up into just three words: He was pissed.

“Fishy, I even gave you my iPad. Can’t you type it out? How could I understand that squeaking?!”

“And you. What are you looking at? You think you’re Gol D. Roger¹? You’re not afraid of being treated like a mental case?”

Yan Jin looked completely unbothered. He did not even spare a pitying glance at Chu Ge. On the other hand, Xiao Yu squeaked another sentence and continued conversing with Yan Jin.

Chu Ge, who was treated like a complete outsider, had no choice but to give in and attempt to join in the conversation: “… So, why were you both looking at me earlier?”

“Fishy asked why didn’t you go back home for the new year.”

“What other reason could there be? We broke up.” Chu Ge sorted through his memories, and he gasped in surprise: “Speaking of which, this is the first time I’m spending the new year with you. I always spent new year’s eve at my girlfriend’s place.”

Xiao Yu stared silently at Chu Ge as his hamster face had “scumbag” written all over it.

Chu Ge understood it for once and snorted scornfully.

He had the capability to date those girls. Why couldn’t he go back to their place to spend the new year?

“You got that.” Yan Jin was not surprised at all: “It’s not the first time. We did spend the new year together once in our childhood days.”

“We did? Was that a few years back? Why do I not have any memory of it?”

“Twenty years ago, on the cruise.”

Xiao Yu quietly gnawed his melon seeds to the side, completely ignoring the boring humans in front of him.

Chu Ge was quite speechless over Yan Jin’s ridiculous memory. He lowered his head and continued eating.

Yan Jin was indeed a decathlon in all aspects. Even his cooking skills were included.

Chu Ge was considered a rare type of winner in life. He often had girlfriends to cook for him. However, he had never met anyone whose cooking skills were as good as Yan Jin.

If he really met such a person, he would marry that person right off the bat. At least it would be like winning over Yan Jin on that matter.

The reason Chu Ge had so many girlfriends and always broke up quickly was mainly because he had no intentions of marrying those people.

Although those girls could not be compared to Yan Jin, there were plenty of women who chased after Chu Ge. Even if the doctor said from the beginning that he would not get married, the ladies did not believe it and persistently approached him. With such situations happening, so long as the person’s background had no issues and they had no specific motives, Chu Ge would usually accept their advances.

The only person that caused problems for him was Fan Xiaoge. After all, Chu Ge did not expect that even with his real identity hidden, he would still end up causing trouble for Yan Jin.

However, those confident women soon realized that the perfect lover, Chu Ge, would not budge at all when it came to marriage. Those who were smarter would be logical enough to leave the relationship. Those who could not resign to the situation would at most drag it out for a while longer and quietly leave after some time.

In the adult world, love was no longer a mirage that would make their blood pumped with excitement. Only actual flowerbeds and weddings were the final outcome of a relationship.

Chu Ge had known it and understood it, but he could not convince himself.

In fact, it was quite expected that from an outsider’s point of view, anyone could logically make their decisions. However, when the situation happened to themselves, the mirage in the desert was nothing. Even the shadows in the mirror could make a person voluntarily hurt themselves badly.

Perseverance and waiting were nothing but excuses to cheat themselves.

Chu Ge had been standing in that mirage for far too long. He could not remove himself from it and had blended in as one.

Since it was a rare occasion, Yan Jin opened two bottles of red wine.

Xiao Yu watched blankly for a long while and only received a little drop that was the size of a fingernail, held in a bottle cap.

This was already an exception made by Yan Jin. He had memorized a hamster’s diet and liquor was definitely a prohibited drink.

Xiao Yu pouted as he could not taste anything out of it. His face had ‘aggrieved’ written all over it.

Yan Jin and Chu Ge began chucking down glass after glass. In the end, they flipped the bottle around to find it emptied.

When the last drop of cool liquid fell, Xiao Yu, who had been watching, immediately charged over to catch the drop with his mouth.

Xiao Yu rubbed his stomach contently and seemed to be a little weird.

After all, he still did not taste anything.

Chu Ge, who was watching the whole incident, was already laughing out loud.

When the clock struck twelve times, it signaled that a new year had begun.

“Squeakk.” That was Xiao Yu.

If Xiao Yu had not existed, the year end holidays would no doubt be Yan Jin’s longest vacation of the year. But after Xiao Yu had appeared, Chairman Yan’s character image had already changed completely and he no longer cared about such details.

He just had to turn down a few contracts to enjoy a holiday.

He could get more free time by finding people to help him out.

To Yan Jin, the year end holidays were no longer considered a long holiday. Instead, he could come up with a short vacation trip. For example, they could visit Country M, Country Y, Country A, Country X, Country F, etc.

Xiao Yu controlled his character as he went on a killing spree without even looking back.

“Fishy, this is not good for you.” Yan Jin said gloomily: “At this rate, you’re becoming a couch-hamster².”

“Squeakk?” Have you ever seen a hamster who isn’t a couch-hamster?

A one of a kind exception.

“You really don’t want to go on a trip?”

“Squeakk.” More real than the gold that you give me every month.

Xiao Yu was in fact speechless. Four Seasons Manor was at least Yan Jin’s own territory where he could do whatever he liked. But in Yan Jin’s plans, Country M, Country Y, Country X, Country F –

What kind of short trips were those? Those were overseas trips, so how could they be considered ‘short trips’? He must be mad.

Leaving the country was one thing. Even if they were to travel within the country, no one would bring their hamster out for a vacation. Xiao Yu simply could not image what it would look like. How were they going to play at the attraction sites? Was Yan Jin going to put him in his pocket or hold him on his palm? Or perhaps he would bring the carrier along wherever he went?

Yan Jin may have been thick-skinned, but Xiao Yu was not.

“But you promised two days ago. That’s why I looked up more information.” Yan Jin looked really upset: “You’re being unreasonable by going back on your words.”

After all, Yan Jin had been taken advantage of once while planning vacations. This time around, he planned to make detailed checks before he began planning.

Xiao Yu was shocked at how Yan Jin falsely accused him: “Squeakk?” When did I promise you?

“Two days ago, when we played games on the couch in the afternoon.” Yan Jin thought about it and reminded: “It was the first time I got a five-kill streak and even sent you a screenshot of it.”

“…… Squeakkk.” Maybe I was too engrossed in my game, so I agreed on a whim. That doesn’t count.

Xiao Yu lowered his head and continued his game.

Yan Jin sat down beside Xiao Yu in despair as he pitifully took out his cell phone and opened the game app: “I’ll play with you in the next match.”

Forget about it, there was nothing wrong with playing games.

It was no big deal if he had forgotten about the vacation trips.

But he had no memory of Yan Jin’s five-kill streak.

[1] Gol D. Roger – a character in Japanese anime, One Piece, who could hear voices of animals(?) 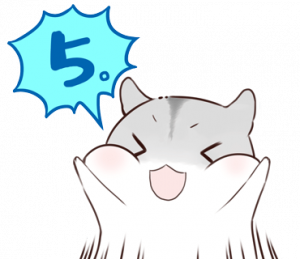