Chapter One Hundred and Thirty-One: Wrapped in Happiness

Ten minutes later, Xiao Yu finally calmed down and began to recount the magical happenings starting from when he turned into a hamster up until he returned to his human body again, all while gnawing nonstop on the different kinds of melon seeds Yan Jin had offered.

Meanwhile, Yan Jin listened quietly to his story and when the latter got tired of speaking, he would pass over the mini cup of water that he had had prepared to quench Xiao Yu’s thirst.

“Squeakk…” So that’s what happened.

The majority of what Xiao Yu had told him was in line with what Yan Jin had guessed. It was not too different from what he and Liu Ye had concluded few days ago. The only inconsistency was their understanding of the one month of ‘tragic circumstances’ that Xiao Yu had lived through.

“Squeakkk!” That lawyer is super irritating! How dare he say I’m planning to murder you! He even said that it was according to your instructions!

I need to get away with this first.

“Lawyer Hu is my friend. He thought that you would harm me, so his way of doing things may have been a little extreme. I’m really sorry about that.”

Yan Jin innocently shifted all of the blame onto his friend, totally not feeling guilty at all.

“Squeakk.” I knew that had to be the case. You are not that kind of person. Hn.

Xiao Yu, who was innocent like a ‘ten-year-old child,’ got duped easily. From a certain point of view, Lawyer Hu’s description of him was very appropriate.

Xiao Yu complained about Lawyer Hu as he stomped his feet agitatedly, showing that he should scold the lawyer to his face if he met him again.

“Could you change back? I would like to talk to the human you.”

Xiao Yu blushed, and he bashfully cowered away.

“Squeakk.” I could. How long have I been like this?

“Squeakk.” I should have turned back by now. I don’t think I drank that much…

Speaking of which, Xiao Yu was puzzled as well. According to his estimation, that glass of liquor should not have caused him to transform at all. Even if he did, it would not be for more than five minutes.

“Your transformation has got something to do with alcohol consumption?” Yan Jin instantly understood the main point.

“Squeakk.” Yup. About one liter of beer could make me stay in this form for around four hours.

Four hours was referring to the length of time he would be in his hamster form. He would need another four hours before his ears and tail went away.

Worried that Yan Jin would not understand the numbers, Xiao Yu even pointed out a ‘one’ and ‘four’ with his little paws.

Yan Jin did a mental calculation and said, “Then you should be able to turn back tomorrow morning.”

Xiao Yu was exceptionally confused. He only had one cocktail that contained less than thirty milliliters of alcohol after all.

Understanding Xiao Yu’s confusion, Yan Jin laughed a little as he explained. “After you were knocked out, they forcefully fed you a bottle of vodka, which is equivalent to six bottles of beer I think.”

“!!!” Xiao Yu was shocked beyond words. He did not expect Lin Zhou to do such a thing, neither could he understand why he did that.

“I’m sorry. I should have gone to save you earlier.”

Yan Jin felt apologetic for having let someone force Xiao Yu to get intoxicated. After he had realized the designer’s real identity, he had immediately gotten his men to follow Xiao Yu around. He had initially planned to look for a suitable time before he brought Xiao Yu back home, but he had not expected Lin Zhou to work so fast that he did not even have time to strike first.

More accurately, Yan Jin did not expect the person behind Lin Zhou to act this fast.

When Xiao Yu had been knocked out in the bar, Yan Jin’s subordinates were in fact at the scene. However, the bar was being watched over by another gang at that point. In order not to alert the enemies, his subordinates could only bide their time and wait till Xiao Yu was taken out of the hotel before they jumped into action.

While Xiao Yu was peacefully waking up on Yan Jin’s bed, the war outside had already began.

Of course, Yan Jin would not tell Xiao Yu about that.

“Squeakk.” Thank you. It’s so good to see you again.

Yan Jin’s gaze was gentle as he leaned forward naturally.

Xiao Yu did not dodge and offered his parted lips too.

“Squeakk.” Hey, won’t you feel weird once I turn back?

Xiao Yu covered his own little mouth and looked away.

“What’s weird? Why would it be weird?” Yan Jin looked genuinely puzzled.

“Squeakkk.” Of course it’s weird. I’m not a real hamster. I’m a human being just like you.

Even without completing his sentence, Yan Jin could still understand him.

“And what’s wrong with that? Your human identity is also my boyfriend.” Yan Jin pointed out the obvious and poked Xiao Yu’s little head. “Speaking of which, I have not settled with you about the mystery designer.”

At that moment, Yan Jin was undoubtedly grateful that he had not officially asked to a break up with Fish and Hamster – You Can’t Have Both, and he could still use that as an excuse.

Chairman Yan, who had a hacker as his friend, revealed his smile of a social expert.

“Squeakk?” Oh, you knew it already?

Xiao Yu did feel a little guilty. When he had told Yan Jin about his identity earlier, he purposely hid the fact that he was the mystery designer. He had never thought that Yan Jin already knew.

“If I did not realize it, ‘till when did you plan to hide it from me?”

Yan Jin kneaded the hamster in his palm in a reprimanding manner, using his thumb to circle around its little stomach.

Xiao Yu curled up into a ball while screaming to be let off, which Yan Jin finally did after a moment, feeling sympathetic.

“You know you’re in the wrong? Don’t hide things from me from now on, okay?” Yan Jin used this chance to threaten.

Xiao Yu flipped himself over and laid his belly on Yan Jin’s palm as he caught his breath.

“Alright, it’s quite late now. Let’s sleep and we will talk tomorrow.”

After Xiao Yu finally finished his grumbling, he got up from Yan Jin’s hand and jumped onto the desk.

Xiao Yu had felt like something was amiss since earlier because he did not see his cage on Yan Jin’s desk.

“Hmm… You can sleep on the bed tonight. I’ll put away your clothes and leave them on the bedside table so that you can put them on tomorrow morning.”

Yan Jin tried to change the topic as he lifted the blanket and revealed the pile of clothes underneath it.

Just earlier, Yan Jin was shocked by the fact that a human had disappeared right before his eyes. Thankfully, he knew that Xiao Yu was once a hamster, so he managed to calm himself and uncover the blanket.

By doing so, Yan Jin found the little fellow who he had been missing dearly curled up among a pile of clothes and sleeping soundly.

Yan Jin initially thought that since Xiao Yu had returned to his human form, his Fishy would be gone from this world forever. He did not expect such a surprise. It made him even more excited than a buy-one-get-one-free situation.

Xiao Yu saw his clothes had been taken out and folded nicely by Yan Jin. For some reason, he felt a little shy and that feeling intensified when the chairman picked his underpants out.

“Squeakkk!” Don’t you dare go off topic! Where’s my cage?!

“Umm…” Yan Jin folded the underpants with teddy bears on them and placed them on top of the clothes. He answered truthfully, “I’m sorry. There’s no more cage.”

Upon hearing that, Xiao Yu’s expression immediately turned sour as the redness on his cheeks spread to his eyes.

“Squeakk…” You threw them away so quickly…

“I didn’t. Don’t overthink.” Yan Jin sighed and picked up Xiao Yu on his palm again as he smoothed a finger over his fur. “I didn’t throw them away, I burnt them.”

“Squeakkk?” Why did you burn them? Didn’t you want to keep something to commemorate me?

“I thought you’d never come back again.” Yan Jin smiled bitterly as he put on a mournful look. “I thought you’d abandoned me and didn’t wish to see me anymore, so I want to forget everything and leave this depressing place. I even bought the airplane tickets.”

Yan Jin took out an boarding pass from his pocket and passed it to Xiao Yu.

Xiao Yu glanced at the pass and realized the departure time was in fact tomorrow morning. So, if Yan Jin had found out about the truth a little later, they may have really ended up losing each other forever.

“Squeakkk…” I’m sorry. I really wanted to look for you and tell you the truth but I’m too useless. I didn’t know what I should do to meet you. Plus, I haven’t settled things with my company, and same goes to my family matters. I feel like I don’t deserve to be with you…

“How could it be? It’s more than enough for me that you appeared in front of me once again.”

Yan Jin looked at Xiao Yu gently making the latter unable to tell if he was speaking the truth or not.

In fact, his feelings were undoubtedly real. As for the other aspects of it, the majority of the lies were just to cover up for his dark, evil side that he had accidentally revealed lately, causing Xiao Yu to have a bad impression of him.

For example, the boarding pass was a fake. The Yan family had three private jets of their own in S City.

“You’re very nice too.” A first-time actor putting up a miserable act and receiving a brilliant response, Yan Jin was filled with confidence about wooing his wife back.

“Alright. It’s almost one in the morning now. Shall we sleep?”

“Squeakk.” Okay. I want to share the same pillow with you.

Yan Jin gladly consented. He placed Xiao Yu on his pillow and pulled over a pillowcase, folded it, and covered the hamster with it. Then, he took off his own clothes before lying on the bed.

After switching off the lights, the human and hamster looked at each other in the dark but neither was willing to close their eyes.

Xiao Yu felt as if he was close to getting cooked as the warm breath surrounded him. Moments later, he squeaked very softly. 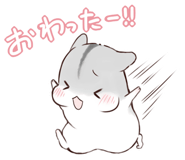