Xiao Yu was surprised. He knew how busy it would be before the Autumn Release Conference. He thought that Yan Jin was just joking with him when the chairman mentioned that he would be home early. He didn’t expect to actually see Yan Jin back this early.

Could it be that Yan Jin had brought unfinished work to settle at home? Yan Jin did seem to have done that in the past.

Very quickly, Xiao Yu knew that he had guessed wrongly, because a few renovation workers in matching uniforms came back with Yan Jin.

Then, under Xiao Yu’s puzzled gaze, these renovation workers… swiftly changed all the lighting in the entire villa.

Yes, the entire villa. Not even a single light bulb was spared and they were all changed into the kind of LED lighting where the light’s intensity could be controlled.

At that moment, regardless of how slow Xiao Yu was, he understood Yan Jin’s painstaking efforts.

Xiao Yu was glad that Yan Jin had not changed this splendorous and majestic villa into a haunted house.

“Are your eyes still swollen? Let me have a look.” Yan Jin scooped Xiao Yu into his hand and examined the hamster. Then, before Xiao Yu could react, the chairman quickly leaned in and pressed a kiss on that chubby little waist.

Xiao Yu grumbled as he was kissed without warning. The little hamster swiped his paws, rubbed the fur that was stained with saliva, and smeared his paws disgustedly onto Yan Jin’s finger.

Xiao Yu jumped from Yan Jin’s palm onto the table, opened the memo app, and typed: “Stop flicking my head!”

“Depends on your performance.” Yan Jin’s tone was full of teasing.

Xiao Yu turned his body away resentfully and faced his butt towards Yan Jin.

Yan Jin broke into laughter as he looked up and checked the time: “It’s about time to bathe. Which little toy do you want today?”

Xiao Yu thought for a moment before he typed: “That little yellow duckling.”

Two minutes later, Xiao Yu sat on the little yellow duckling and floated on the water. Somehow, he felt that something seemed weird.

He looked at Yan Jin, who was casually squeezing some shower gel onto his palm, gently rubbing out some foam, and then smearing the content onto Xiao Yu, transforming him into a little white rat.

Wait, that’s not the point.

Xiao Yu was unable to open his eyes with his body covered in foam, so he had no choice but to obediently allow Yan Jin to manhandle him.

What Xiao Yu was thinking was that his identity had been exposed less than a day ago, so why did Yan Jin enter this new interactive pattern so quickly?

Plus, Yan Jin did not seem to have any intent to investigate his origin.

Could it be that this was just the calm before the storm? Was Yan Jin in fact already prepared to throw him away?

Xiao Yu, who was letting his imagination run wild, successfully fell off his little yellow duckling.

The bathtub was not shallow at all. Thankfully, Yan Jin was right beside it. He swiftly scooped out the hamster that was struggling in the water and wrapped him with a nearby towel.

Fortunately, the recent weather was not too cold. After Xiao Yu was blown dry, other than having a fluffy coat of fur, he did not seem to have any problems.

Yan Jin sighed as his tone was filled with helplessness: “What were you thinking? You’ve never fallen off before. Now that your identity is exposed, your intelligence was lowered?”

As if knowing that Xiao Yu needed something to express his internal frustration, Yan Jin brought the iPad over.

“Who asked you to accept all these so naturally.”

“My identity of course…”

Xiao Yu felt a little guilty that Yan Jin did not bother to ask and that made him feel anxious and frightened. But if Yan Jin were to ask him, it would not make him feel at ease either.

What if he decided that he didn’t want Xiao Yu any more after asking questions?

Xiao Yu, who had no way out of this dilemma, never would have thought that Yan Jin was in fact not bothered by all these worries he had.

“Your identity? Don’t I know about that already?”

Yan Jin raised Xiao Yu to his eye level and looked at him directly.

“You’re a hamster demon that brings good fortune. Am I right, Mr. Demon?”

Yan Jin articulated this question in his deep attractive voice as if he was whispering words of love into the ears of his lover.

Put this great demon down.

After they exited the bathroom, Xiao Yu stood on the desk as he began typing again while he squeaked for Yan Jin’s attention.

“You’re really not lying to me, waiting for me to let down my guard, and then throwing me away?”

Before he could even finish typing that sentence Xiao Yu was lifted again.

His four little limbs flailed around as he was kissed from head to toe by Chairman Yan.

Even the sounds of his squeaks were drowned by those kisses.

“You ungrateful little thing, thinking about foolish things all day long.” Yan Jin gave a final kiss before he rubbed on Xiao Yu’s stomach as he promised: “If there’s ever a day that I say ‘I don’t want you anymore’, then it must be April Fool’s day.”

Xiao Yu heard that clearly despite getting kissed giddily. He grabbed Yan Jin’s lips that were within his reach and said seriously: “Squeakkk. Squeakkkk.”

That’s a promise. You’re not allowed to lie.

Xiao Yu, who was put back onto the table, typed on the iPad: “Don’t you need to go to work today?”

It was almost nine in the evening. Usually this was the time when Yan Jin would have just reached home. But he had returned home early today, and after being busy for the whole afternoon, Xiao Yu had not seen him work at all.

“How can work be more important…” Yan Jin paused and changed his statement: “There isn’t much left. I’ll settle it over the weekend.”

What he originally wanted to say was ‘how can work be more important than Fishy’. But seeing how embarrassed his little hamster was still acting, he decided not to tease him anymore.

However, he was not sure if such an excuse would be enough to deceive the little fellow.

In fact, Xiao Yu did believe him.

Sometimes logic could not be compared to a great person’s charisma. When they were at home, Xiao Yu would often wonder whether Yan Jin’s intelligence had come online or not. But when it came to work matters, the impression of Chairman Yan in Xiao Yu’s heart instantly leveled up.

SI was the big leader in the jewelry business for the past five to six years. However, during the period when Xiao Yu had just joined SI, the less prominent Yan family suddenly rose among the obscure and unknown companies. They instantly jumped up to stand on par with SI. Within a year, YL had achieved top-class standards for the sales volume of their few original jewelry designs. And this world-shaking change was simply because the Yan family had changed their chairman.

Yes, that person was the then twenty-year-old Yan Jin. The young chairman introduced solid policies in a swift and decisive manner, making YL rapidly grow into the industry’s pillar in just a short one-year period, leaving a lot of older entrepreneurs flabbergasted.

If they were to speak solely on career milestone, there were no lack of people who admired Yan Jin.

Which was why, when Yan Jin mentioned that he would be settle his work over the weekend, he must have had his own reasoning.

Xiao Yu believed that without any doubt.

Then, a sentence appeared on the iPad –

“Since you don’t have any questions, can I ask you something instead?”

Yan Jin raised his eyebrow: “Fishy is curious about me?”

Xiao Yu thought for a moment. He did not type out what he wanted to ask the most. Instead, he typed out an unrelated question first.

“Why do you always understand what I’m trying to say? I just squeak away all the time.”

Rather than saying that was a question, it was more like deliberate currying or pure admiration.

It was like asking a top student ‘why are you so smart?’ or ‘why do you know everything?’. Normally, these top students would act cocky and reply ‘I’m not omniscient. The paper happened to have questions that I understood.’ Or something like that.

Xiao Yu was planning to use that excuse to brighten up the atmosphere. He would wait for Yan Jin to show off or tease him with it, and then he would proceed to ask what he truly wanted to ask.

Xiao Yu didn’t expect that although it seemed to be a simple question, it was an issue for Yan Jin.

Yan Jin opened his mouth a few times, but he never gave an answer. In the end, he put on a forced smile.

That was the first time that Xiao Yu had seen such an expression on Yan Jin’s face. It was like –

“It’s probably because I kept quite a lot of small animals in the past.”

Yan Jin gave an explanation that seemed logical but was completely unrelated to showing off.

Xiao Yu was somewhat puzzled by the answer, but he could tell that Yan Jin did not want to continue on that topic, so he decided to tactfully end that discussion.

His gut feeling told him that it was not a good topic.

“Okay then. On to my second question.”

Although the attempt to liven up the mood did not seem to be successful, Xiao Yu still got to ask the question that he wanted to ask the most.

He had his back facing Yan Jin as he became bashful for a moment before typing on the iPad:

“After you found out about my identity, did you think of chasing me away even once?”

After waiting for a while and neither hearing Yan Jin’s answer, nor seeing his expression, Xiao Yu suppressed the panic in his heart and continued typing: “After all… It’s kind of supernatural…”

“You can stop typing.”

When Yan Jin suddenly opened his mouth, it made Xiao Yu’s heart tremble.

The chairman continued: “I don’t believe in the supernatural. I only believe in myself.”

“I believe that my Fishy won’t harm me, am I right?”

“Plus, that is something that I should be worried about.” Yan Jin turned Xiao Yu around and asked softly: “No matter what Fishy’s identity is, you would never leave my side, right?”

Xiao Yu wanted to answer ‘Yes’, and he really wanted to say, ‘Thank you’, but at that moment, he could not let out any sound at all.

Without a choice, he could only cover his face with his two paws and nod his head heavily. 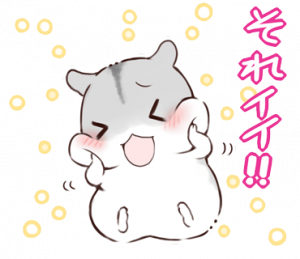