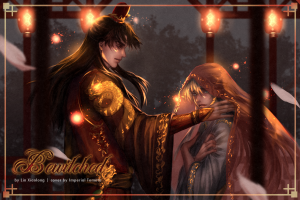 In order to protect his kingdom, King Song Min of Dong Xing Kingdom was forced to make a decision. He reached out to the Emperor of the neighbouring country to ask for protection and in return, he would send his only daughter to enter the Emperor’s harem.

Unfortunately, the daughter was unwilling to serve someone who is several decades older than her and when it was time for her to leave, she disappeared. Pressed for time, the King can only send the male twin brother as the temporary replacement until the time when they found her again, and only then would they be switched once more.

Follow the story of Song Lijun as he was forced to replace his sister as the wife of a man he never met. Every single day, he is in danger of being found. And the thought that his Kingdom would be destroyed once his identity as a male is found, he is forced to always find ways to ‘please’ his ‘husband’ while avoiding being found out.

Disclaimer: The story is merely a work of fiction. Names, characters, businesses, places, events, locales, and incidents are either the products of the author’s imagination or used in a fictitious manner. Any resemblance to actual persons, living or dead, or actual events is purely coincidental.