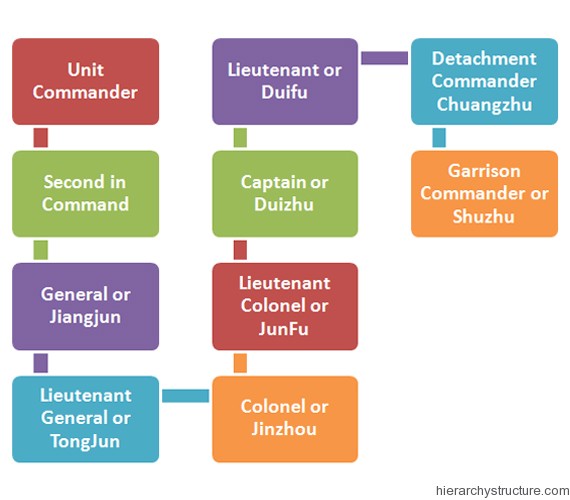 This rank was assigned to the military officer who followed the commander. This rank can also be considered as the deputy commander rank. The second in command was responsible for taking complete charge in the absence of the commander and to assist the commander in various operations.

The colonel used to be the topmost officer of a regiment and was responsible for the supervision, training and leading the military operations in the regiment.

A lieutenant colonel was responsible for assisting the colonel in his activities pertaining to the regiment.

A captain was the senior-most officer of a company.

A lieutenant was among the junior officers in the company. These officers were mainly responsible for fighting on the battlefield.

A detachment can be defined as the military unit that has been detached from major army sections for certain specific reasons. The officer leading a detachment unit was named as detachment officer.

A garrison commander in the ancient Chinese military hierarchy was the in-charge of a certain military facility and was responsible for the day to day operations of that facility.