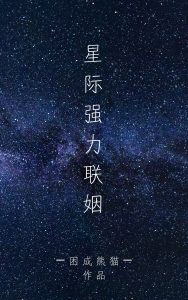 Lei Jue was a ranger and guardian of the wildlife. At least until he got shot and died, then woke up in the future on a planet he never even knew existed. There, he became Lei “Descendant of a Noble Family” Jue, and engaged to a notorious playboy. In Lei Jue’s opinion, marrying this stranger would cause no end of headaches and hassles, but in order to leave the outwardly majestic—and inwardly dirty—Lei family, he decided to marry the playboy. The two appeared to get along, becoming a couple in name. But looks can be deceiving, and neither of them expected what was to come.