Quickly Wear the Face of the Devil 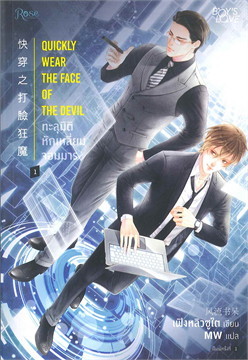 Quickly Wear the Face of the Devil

The top hacker was chosen by the Lord God to be reborn as hundreds of thousands of villains,

Every world ended in a dead end,

Every end is tragic.

Finally he escaped the control of the Villain System,

He decided to enact revenge, change his fate as an abused slag

Even if his every bone is rotten,

He’ll occupy the heights of morality, even if it’s just the surface.

I’ve been kinda hesitant about this story for some reason. Maybe because the summary does not truly capture the essence of the story but well, summaries rarely do justice to stories in general. So for every other in doubt people out there I have just 3 words for you. READ. IT. NOW.

Let’s talk about our main character. He has a very refreshing personality, truly the breath of air we all need. Not a traditional danmei/yaoi novel character which in my books scored a 100. It’s very tiring to read the same unidimensional overtired characters over and over again. But here it is not the case at all. He is smart while utterly unapologetic about it, charismatic and likeable. Zhou Yun Sheng has an ultimate goal. Take revenge on the Lord God. To achieve it ZYS lives through multiple lives. And so this is an episodic type of novel. While this may scare off some readers don’t worry. Each of the setting is explored deeply enough to let you want for more while at the same time leaving you with the satisfied feeling of reading a whole new and decadently good novel. What makes me even more in love is the fact that each of the episodes are clearly equal in the amount of effort put in by the author so while there are some clear favorites they are all very good.

The story takes place in a lot of VERY different settings. Historical, slice-of-life, showbusiness, xianxia. You name and it’s there. The 2 constants are the main character and the male lead. The interaction between the 2 can somehow always make me laugh while going awww over how cute they are together. Truly an iconic duo in the way that it is very easy to cheer on their relationship. There’s almost none to negative angst in their interactions and for me, a super big fluff lover it’s like cherry on top of a deliciously well written novel.

In each of the setting ZYS is reborn as a person doomed to a pretty terrible life either by the actions of the characters around the person he is reborn as, or by one’s own doing. So the MC seeks to reverse the situation. From another point of view this can be seen as a struggle against the destiny, the so called path set in stone which our MC gleefully destroys in a seemingly ever eternal fight against the antagonist, the Lord God. The great thing about this premise is that it gives to the reader a whole new perspective in which they look at the so called “cannon fodder” characters.

Personally I love the story to bits. The author’s writing style keeps you enchanted from the start to the end all the while making you ignore little annoyances such as sleep OTZ. So clear your weekend, grab your cup of tea and prepare for a treat to your mind. But seriously, do clear your schedule beforehand else the temptation will make you skip school or work.